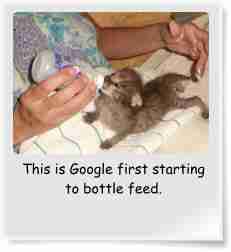 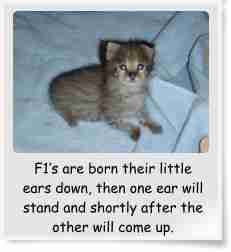 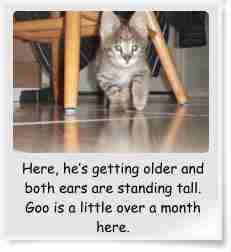 F1 Savannah Cat Google was a miracle baby to us when he was born, then his story got even more interesting.

F1 Savannah cat Google is a very rare version of F1 Savannah.  Rare because his mom is a Serval and dad is a domestic cat, a Maine Coon.  The usual and common F1 breeding is male Serval to a domestic breed of female cat.  This female Serval whose name is Blair, is of our own breeding and this was her first litter.  We didn’t even know she was pregnant.

Blair serval dropped Goo from the perch where she birthed him.  This serval momma didn’t know how to care for Google, so I hand raised him.  Tube feeding at first and then bottle fed and eventually introduced to solid food.  When a person raises a baby animal from birth like that, there is a special bond that lasts a lifetime.

Google spent MOST of his life with us, but as a young boy, he decided to take what we lovingly now call Goo’s Great Adventure.  We built F1 Google a huge outdoor catio, with 24/7 access to the outdoors, birds, grass and toys for his first birthday present. Two weeks later Goo made the decision to push the screen out of the only window in the house that was not cat proofed and he left.

As anyone can imagine, I was frantic. My family kept me grounded and we did all the right things. Right away we made flyers and canvassed hundreds of houses. Posters of Goo with contact information taped to every mailbox in a ten mile radius. We placed lost and found ads and even a recorded message of my voice calling him home. It played on the front porch on an endless loop so he could hear me if he was close by hiding somewhere.

The front and back doors of the house and the door to his playpen remained open for a week. We thought he might stroll back in. We had all manner of bugs and the like come in and visit, but no Goo. 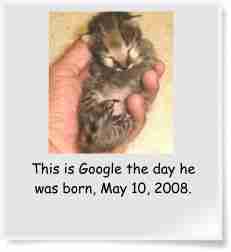 One morning, two weeks later a young lady called me. She said, as she was getting off the school bus, she saw Goo run through her yard and into the neighbor’s yard. My boss, who met Google and was hopeful I could bring him home gave me the time off to go look. Two friends and I spent the next few days and nights watching and calling for him, again without luck.

After around a month went by, I began to grow numb with the awareness that I probably was not going to find him. Inside I changed. I went about my daily tasks, but I missed him so much. There was enthusiasm for nothing. Over the next few months I still held out hope. When I walked the dog, I would look for him. If I left in the car, I would watch the roads and fields on the way out and on the way back.

One evening on the way home, I thought I saw him and in the dark I got out and called for him. A neighbor passed by and stopped. He got out his flashlight and helped me to look; even boosted me over a fence so I could go see over a hill. I told him that night I couldn’t stop thinking about him and I had a feeling he was not dead; I just hadn’t found him yet. 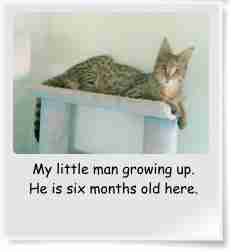 A few weeks later I had agreed to meet some friends for lunch on a Saturday afternoon. While getting ready, I went in to check my email. There were three emails from other Savannah breeders directing me to an add on Craig’s list. I was curious so I opened the ad and there was Goo in a picture advertised as a Collectible for $6500. My heart was beating wildly, and I wanted to go and get him, but the only contact was an email. I was afraid that the person might recognize my name as a Savannah breeder. She might then refuse to communicate with me.

I called Pete, (now my husband) and had him look at the ad.  He said to let him take care of it.  Pete wrote her an email. The woman responded and set up a time to go see the cat.  He told her he was ready to buy so we could find out Goo’s location.  She told him she and her husband had trapped him because he was hanging around and was very skinny.  We got a crate and went visiting. 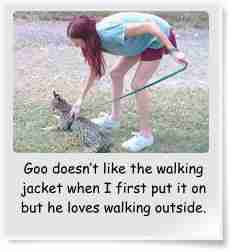 Pete asked me to stay in the van so I wouldn’t get emotional. Of course, I couldn’t do that, so I promised to go in and say nothing and off we went to see Goo. She didn’t want to allow us in to touch him. As soon as she let us look through a door to her living room I exploded with joy. The anticipation was over, it was him, and begged to go in to see him. I saw his beautiful face for the first time in over 6 months.

She refused and things started happening so fast I don’t remember it all. I finally blurted out, “he’s my cat and I want to go see him.” She got a horrid look on her face and said, “get out of my house, just get out.” Then she thought a second and said, “he’s not micro-chipped, you can’t prove he is yours.” I returned with, “true he’s not micro-chipped. But both his front legs broke the day he was born, and I have many x-rays to prove who he is.” 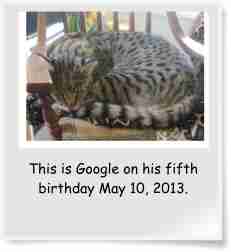 Goo’s Story at the Farmhouse

The woman’s son looked up what kind of cat Goo was while at the library. He gave her the number of a prominent Savannah cattery in Oklahoma. It was Martin Stuckey of A1 Savannahs. She called this man for advice. After the second conversation, he told her he would only help her by coming and getting the cat. If she didn’t let him do that then don’t call him and bother him again.

That was awfully disappointing to me. Martin, who I met a couple years before, knew there were only three Savannah breeders in that area. He could have called any one of us to see whose cat it was. I will never forgive him for that. But I digress.

The woman finally let me in to see Goo. I brought him some meat from home and within a minute he was sitting next to me and eating out of my hand and purring.

She said the whole time he had been there she had never been able to even touch him. Also that she was so afraid she kept a broom nearby to keep him back when she went in to feed him.

I gave her the reward money and we stayed in touch for a while.  I considered myself lucky that she did trap him and feed him, or I would have never seen him again.

Goo was thin and had the squirts because of the food he ate there (Meow Mix), but once he was home, he was happy.

We could all tell he loved his home and he gained weight quite quickly. Goo was back to his own self and has never tried to go out a door or window again.  I guess one great adventure was enough for him and he is glad to be with his people.

We are certainly glad he is back, and the story had a wonderful ending and will be forever grateful to the breeders who directed me to that Craig’s list ad. 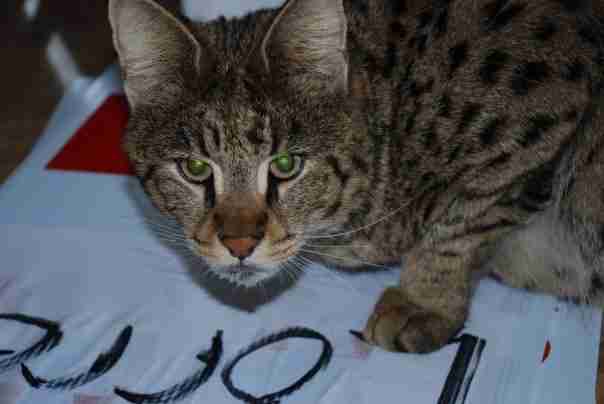 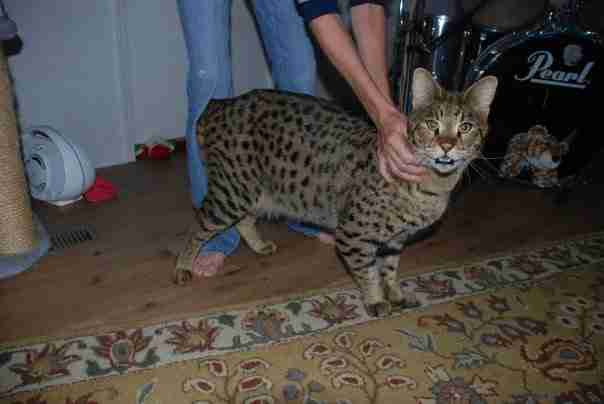 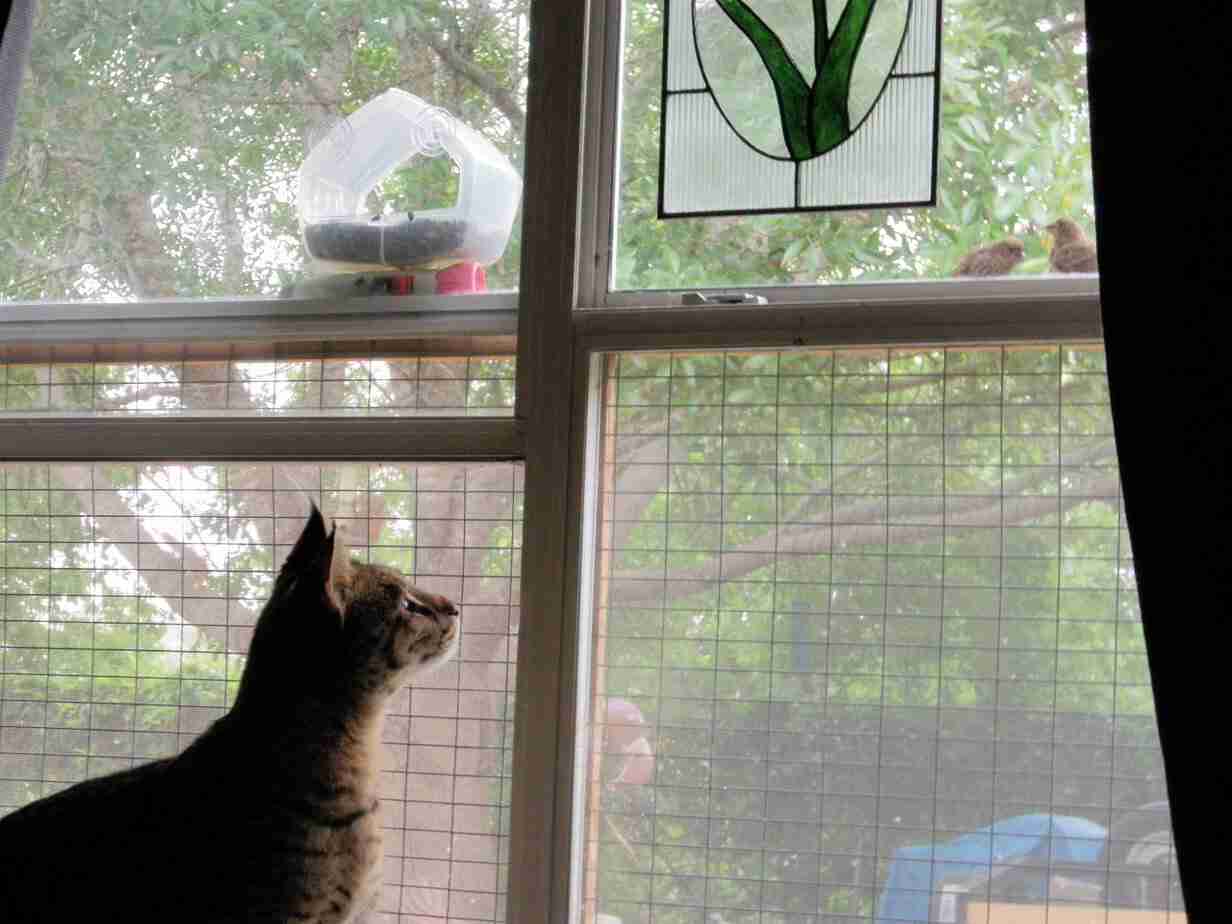 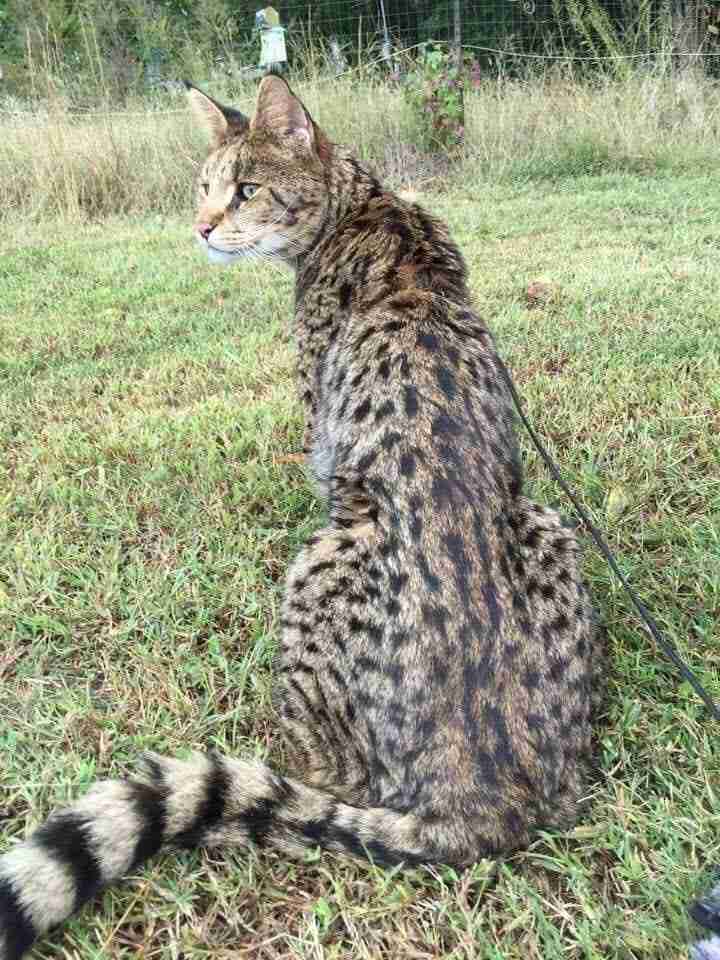 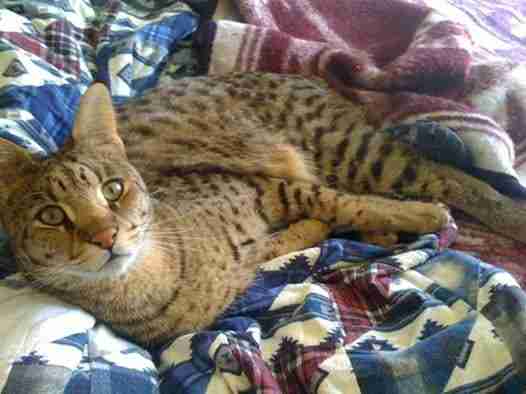 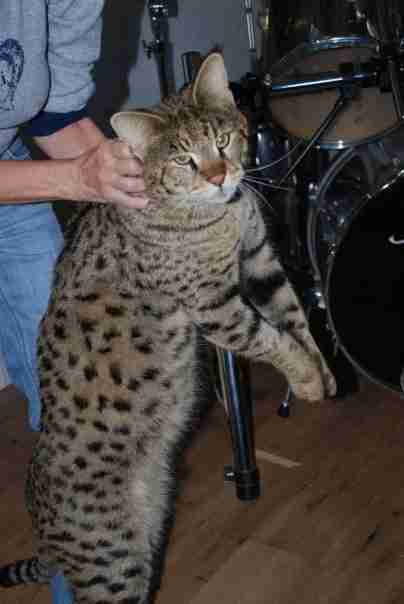