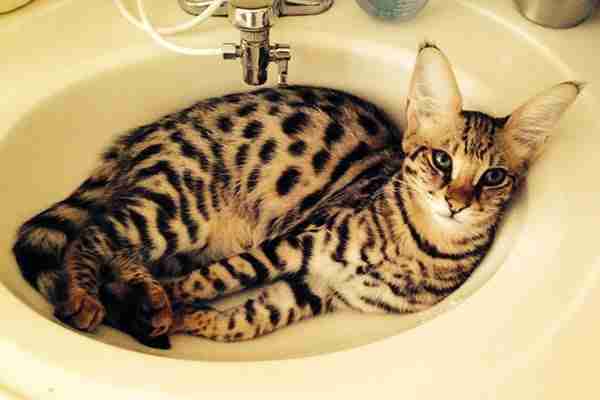 In this modern day and age, Savannah cat breeders have many tools available for advanced testing of their cats.  This ensures the best possible health of the kittens born under their care.

The following are the tests available and we will go over them individually later in this article.

PK Deficiency, called PKdef by breeders.  PKdef is a form of inherited and severe anemia found in cats.  Cats can be either (N,N) which is completely negative for carrying the disease.  Another result of testing is (N,K) meaning the cat carries one copy of the disease and can pass it on to kittens but it will never be sick itself from the disease.

The final outcome from testing could be (K,K).  This is a cat who is positive for the disease.  It means that cat will, at some point in his life, start getting ill and die from PKdef.  Also, the cat should never breed. It will pass on the disease to every kitten as a carrier and depending on the other parent maybe kittens with the full-blown disease.  A good idea is to choose a kitten from a breeder who has tested their adult cats.

Progressive retinal atrophy (PRA) is degeneration of the retina, causing progressive vision loss in both eyes with eventual total blindness.  This will not kill a cat; however, it is a terrible way to end life.  A cat who has no way to see can strike out at anything to protect itself. This includes family members.  You can see why responsible breeders choose to test their Savannah cats and not pass this disease on to kittens.

The test for Savannah cat PRA is PRA-CEP290.  N/N results mean cat does not have the disease.   A carrier, cat has one copy of rdAc. Cats that show rdAc/rdAc have inherited the full disease.  Affected cats are born with normal vision, show retinal degeneration at about 7 months and are blind by age 3-5 years. The condition has no treatment.

This test only detects the mutation in the CEP290 gene known to cause PRA-rdAc in Abyssinian, Somali, Ocicat, Siamese and related breeds, American Curl, American Wirehair, Bengal, Cornish Rex, Munchkin, Singapura and Tonkinese.  Many breeders used the Siamese and Bengal breeds in the early generations.  Other PRA tests exist for breeds other than the ones listed here.

Hypertrophic Cardiomyopathy (HCM) is a condition that causes the muscular walls of a cat heart to thicken.  This decreases the heart’s efficiency and can cause the lungs to fill with fluid.  Unfortunately, there is no specific test for the Savannah cat breed yet.  Some breeders, myself included, can use the HCM test for Maine Coon cats because we have used a Maine Coon to breed to the serval.  The best possible way to test for HCM is echocardiography.  This is a test that uses sound waves to create an image of the heart. Cats with HCM, show images of thickened walls and constricted volume of the left ventricle of the heart. This testing is expensive, so it is best to look for HCM clinics often sponsored at TICA cat shows.

Color testing is not a life-threatening test.  Most breeders use this type of test to see what colors a cat may carry when paired with another cat.  The most common tests Savannah Cat breeders use are the Agouti (tabby) and Charcoal Chocolate/Cinnamon tests.  There is no test for silver or smoke colors because it is not a color.  The silver and smoke appearance is an inhibitor of color.

Most all cats are the same blood type; Type A.  A few are Type B and even less are AB.  Cats that are Type A have antibodies for Type B and Type B have antibodies for Type A.  If a Type A cat breeds to a Type B cat or vice-versa the resulting kittens will start to hemorrhage.  If the breeder doesn’t know what is going on, they could possibly lose the whole litter.  This is not an often occurrence.

If a breeder begins to lose litters, it is smart to get this type of test done on the parents.  Important to note that the two cats can still breed but the kittens must be taken away at once, and bottle fed for a few days.  This is a very short explanation of the mechanics of this situation.  Genetics books are a great source to understand this fully.  A simple swab test to determine blood type will show the mismatch.

Certapet states they can determine if your cat is related to a certain breed.  We often get people who go to a shelter and adopt a spotted cat.  Then they will contact a Savannah cat breeder and ask if they have a Savannah.  There are several breeds of spotted cats and most times it is impossible to determine if a cat from a shelter is a Savannah.  Certapet used to say on their site they can tell if a certain cat has a serval as a distant relative.  They also say that they can tell other breeds as well. Lately several people have reported back that they cannot actually find servals or determine a breed at all.

PCR testing is not genetic testing in the normal sense of genetic testing.  The test does not test for cat genetics.  However, it does a test for the presence of biological species that exist and causes disease in a cat or other animal.

There are two common tests that responsible breeders do to make sure their kittens are healthy before they go to their new families.  The Feline Respiratory Panel is the first.  It tests for the following diseases: Bordetella bronchiseptica, Chlamydophila felis/psittaci, feline calicivirus, feline herpesvirus 1, Mycoplasma felis.

These two tests cover most major diseases a kitten could have coming from a cattery environment.  Of course, a fecal swab for coccidia and a snap test for Feline Leukemia at the vet is also important.

Hopefully, this is just a subject to know about and no one will ever experience.  In crimes, a cat hair found at the scene helps solve a crime.  It could be the perpetrator’s cat’s hair that he deposited at the scene.  Another possibility is a cat hair found on a suspect is a cat at the scene and ties the villain there.  It is amazing the things genetic testing can do.

For Savannah Genetic testing, UC Davis is a good lab to use with a great staff.  Also, Zoologix is a great place to work with.  UC Davis has a cool tutorial that shows exactly how to do an effective swab for testing.  Finally, although I have never used Certapet, here is a link for testing what cats may be in your feline’s parentage.